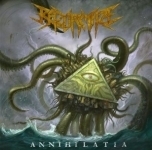 There’s nothing better than Thrash Metal that is destined to keep your neck muscles busy and fingertips relentless, pounding the surface of a table nonstop. Massachusetts based Thrashers RAZORMAZE have got their 2nd studio full-length recording out, obeying the title "Annihilatia" – and containing 8 tracks of catchy and very hooky-filled Thrash Metal that are right up my alley. It can be noticed right from the first moments that the musicianship in RAZORMAZE is tight as hell, and there’s really something special in the band’s up-tempo-ish songs that force you to turn up the volume levels radically, grab a beer (or two), and just bang your head the way like a pillbox of painkillers could be your only friend in the next morning. Unlike many other Thrash Metal bands, RAZORMAZE have this pleasant, nice rocking vibe incorporated within their sound, pretty much the same way bands like MEGADETH or ANNIHILATOR or EVILE squeeze some Rock elements into their songs, which provides sort of a welcomed tasteful flavor to their songs. The songs are full of tempo changes – and relatively many of them come even unexpectedly, which definitely speaks for the guys’ hardworking attitude toward their own band, no doubt. RAZORMAZE’s coherent, retro-ish Thrash Metal flows just nicely and beautifully, securely leaving many Thrash bangers and Speed merchants somewhat satisfied with this release. More about these gifted Thrashers can be found at www.facebook.com/razormaze, label: www.slaneyrecords.com