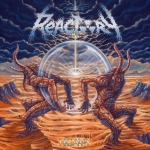 The four-piece Thrashers REACTORY come back with the successor of "High Radiation", the debut full-length released by Iron Shield Records just two years ago. In that time, this band from Berlin has exhibited their incorruptible attitude with the furious Thrash attack, supported for the first time on drums by the ex – SOCIAL CHAOS Cauê Santos. After a change of label, they have collaborated with F.D.A. Records for this new album. REACTORY have produced their second main piece of their discography called simply "Heavy". If you are familiar with this band, you’ll instantly notice a different beginning related to the previous album. If ‘Shell Shock’, the first track of "High Radiation", put the foot down from the first second, the start of "Heavy" has a more controlled progression. Evidently they trained to play groovier and powerful. But when they explode the first riff of ‘To Thanatos (Fumigation From Manna)’ their roots reveal themselves vehemently. For the second track, the Berliners play their best card: ‘To Hypnos (Fumigation From Poppies)’ is really a good song! Composed mainly on triplets, it has a catchy impact and every part is entirely connected to each other. Then there’s two other excellent tracks, ‘Deep Tranquillity’ and ‘Shrines Of The Forgotten Gods’: the first one is a heavy mid tempo track that will let you squirt the brain in the headbanging process; the second one is the right fast response, the classic Thrash song perfect to animate the circle pit. Unfortunately, my positive view decreases a bit during the listening of the remaining half of the album. ‘Angstharsis’ and ‘Monolith’ don’t take off, dragging without an effective outburst. ‘Pleasure Seeker’ has a more complex structure being also the longest song of the album; there are good riffs but something doesn’t please me at all. Before the end, ‘Let Me Rage Before I Die’ brings back the speed on top, simplicity and violence are the key words. "Heavy" is then closed by a Thrash Metal version of ‘Eat The Rich’ by MOTÖRHEAD, a good interpretation in my opinion, a nice tribute to the heroes of Rock’n’Roll, but of course it loses the bluesy soul of the original one. So, REACTORY confirmed all the goods they did during the last five years and they matured their songwriting. They did aim to keep their main influences alive, American and European as they declare. And it’s true, you can easily find traces left by TESTAMENT, TANKARD, MEGADETH, EXODUS, SODOM, KREATOR and VIO-LENCE thirty years ago. And you can be sure they didn’t contaminate their sound with hasty ingredients, this is 100% Thrash Metal and they put aside any kind of evolution, as the genre has become a shitty joke after the golden era of 80s. The revival of Thrash Metal is still living, even if original ideas are totally used up, but REACTORY could play a leading role if they will improve their skills and their songwriting more and more. It’s a difficult challenge but all the four musicians here are able to pass it. Check out their website www.reactory-thrash.com or follow them at www.facebook.com/reactory, and don’t forget to visit www.fda-records.com to pre-order a copy of "Heavy".