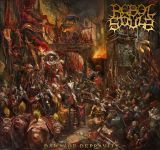 “Dawn Of Depravity” is German outfit’s REBEL SOULS sophomore album after their 2017 debut and their three previous demos. This album features a pristine production. The mix is right in your face with every instrument accurately occupying its place. The guitars create a humongous and intense wall of distortion aided by the gargantuan drums, pounding bass tone and the mid-pitched growling vocals. The mastering is really violent. Some dynamics may have helped a bit. But in nowadays’ scene, the saying that goes “the louder, the better” has found a niche and it has expanded modern production values in every subgenre of extreme Metal. But this does not deter the listener from enjoying “Dawn Of Depravity” thoroughly. It shows that this collection of songs has gone through a lot of blood, sweat and tears and it shows how serious REBEL SOULS takes their music. And this monster of an album coming from only three guys says a lot about them. They sure put the “power” in “Power Trio”. The mix of tremolo riffing, palm muting and big open chords from guitarist Alex with the constant tempo variations from drummer Voor and the searing bass from vocalist / bassist make this album a whirlwind of Death and Black Metal. It was really hard for me to pin down exactly what they were going for after the first listen. There is a lot happening structure wise, bordering the technical Death Metal territory. These performances are precise and fierce, but still retain that old and classic feel, despite the overall sound. Considering that this album is not exactly a breakthrough, it is definitely worth it. It is solid, mean, played how it is supposed to be played and as intense as it gets, borrowing influences from classic and also recent Death and Black Metal bands, but not following any trends and also adding a lot of their identity. You can follow the band and check them out at www.facebook.com/rebelsouls.deathmetal and get their album from www.facebook.com/bloodfirepromo