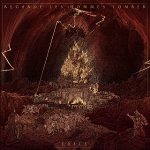 REGARDE LES HOMMES TOMBER from Nantes in France release their second full-length album called “Exile” within only four years of band history punctually for the start of the suicidal season. Their vision of Black Metal is very dark and menacing and a mixture of several genres. The main topic of course is Avangarde Black Metal or Post Black Metal with influences of Doom / Sludge Metal and some Hardcore mixed together to a lethal cocktail. The band understands to create a very dark and intense atmosphere and to take the inclined listener on a dark trip straight into the abysses of their darkened souls. Their sound consists of blistering dissonant guitars, strong and ever present bass-lines, intense drumming and very intense vocals, sometimes cawing, sometimes desperately screaming, sometimes influenced by Hardcore bands but never overdone. The band understands to move within the several styles and creates a conherend mix. The hopeless and intense atmosphere is really menacing and injects a suicidal mood into the mind of the listener. What differs to other bands is the fact that Black Metal is just the fundament of their music and everything else is build up upon it. Sometimes very dark, sometimes raw and then again really nice melodies show up and these changes are causing the emotional roller coaster the listener goes through. Also compared to other protagonists of this genre, their feeling for dark music and the mixture of its ingredients is a lot better than known from most of the other bands. REGARDE LES HOMME TOMBER really understand to create melancholy and despair and even though their ingredients are rough, their music is still somehow melodic. A strong and recommendable second album, which shows its optimal intensity via headphones or a loud playing. Fans of bands like CELESTE should check the band out at the following locations: www.facebook.com/rlhtband, www.lesacteursdelombre.net