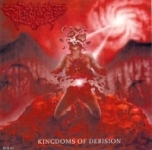 The band’s name is REGORGE, the album cover art was done by Zig, song titles among others include ‘Inverted Throat Fuck’, ‘The Bloodletting’ and ‘Rest In Pieces’… On two of the songs we get to hear PYEMIA’s Joel Sta on (inhuman) guest vocals (he was also responsible for the album’s layout, by the way) and they are on the GOREROTTED company Dead Again Records… So, what you see is what you get?! No, not really… because even though this Scottish fourpiece is being promoted as "blasting brutal technical Death Grind", I would not necessarily put this label on them all exclusively. Ok, the lead vocals by Richy Graham are of the usual "deep – deeper – ridiculous" type, but the band in general is alot better than just that (they were even voted "best unsigned band" by the readers of UK’s Terrorizer magazine!). This is highly technical Death / Thrash, performed by skilled musicians, only interrupted by a couple of grind parts here and there. Except for the already mentioned ‘Inverted Throat Fuck’ none of the other eight tracks comes up with a playing time below the five minutes mark (‘Unleashing The Beast’ is even close to eight minutes), so there’s always a lot going on within each song. Unfortunately the rather dull vocal delivery destroys the listening pleasure pretty quickly (it partly even sounds as if the guy not even sings any lyrics at all, but just a monotonous form of sounds). In that department the additional aggressive Black / Thrash type vocals of bass player Phil Wilson – despite the usual factor of unoriginality – fit the overall style a lot better. So, my advice would be – to either kick Mr.Graham in his butt (in order to improve his brutal vocals) or to kick him completely. Because in this constellation the band is definitely wasting their talent… Label contact: Dead Again Records, P.O. Box 28742, London, E18 2WJ, UK, email: promo@deadagain.fsnet.co.uk website: www.deadagain.fsnet.co.uk