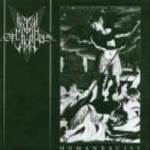 When it comes to honest, non trendy sounding Black Metal, the UK wasn’t necessarily the number one country to check out thus far. But with the release of REIGN OF EREBUS’ first full length “Humanracist” this could possibly change around for the better now. The band has undergone quite a few drastic line-up changes ever since their origin back in 1997 and is unfortunately still struggeling in that department as their session musicians Malleus (drums) and Baal (guitar) have already left the band again since the recordings of the album due to other commitments. So, if you’re interested to join them, don’t hesitate to contact Plastic Head for further details (www.plastichead.com). Musically REIGN OF EREBUS are extremely raw, very intense and often almost kinda close to chaotic noise, and from what I suppose just by reading the songtitles, lyrically completely dedicated to the left hand path. The entire record doesn’t feature any nice melody at all, just straight ahead destructive and blasphemous furiousity. The production is not exactly the best, but at least very authentic (without any cheap studio effects in order to achieve a more perfect drumming or whatever) – everything just comes across very live sounding. Too bad, that because of that the very hateful vocals unfortunately got lost a little bit too much in the mix. They furthermore only seem to use keyboards to create an overall scary atmosphere, with lots of obvious classical influences. The way they incorporate them into their music somehow reminds me on the pretty famous shower scene in Hitchcock’s “Psycho” movie. But to avoid misunderstandings, REIGN OF EREBUS is mainly a very extreme, guitar dominated band, the keyboard only gets used very rarely and more in the back. So, all in all this is certainly not the next big thing, but at least a very dedicated and uncompromising band that everyone who hates the usual CRADLE and DIMMU stuff should keep an eye on.