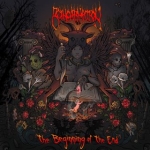 REINCARNATION
The Beginning Of The End
(Xtreem Music)
35:03min

It seems like the curse of Repulse has been hanging over me – almost 20 years ago when I was doing my own zine Wounded I had the unpleasure to review the REINCARNATION mini CD "Seed Of Hate" which I described as "the worst garbage I heard in my life". Fast forward 20 years – Repulse Records now is called Xtreem Music and "The Beginning Of The End" is the second REINCARNATION album released by this Spanish label which proudly proclaims: "Long awaited 2nd album, 18 years after their debut, by this legendary Spanish brutal Death Metal band in the vein of SUFFOCATION, SKELETON OF GOD, PYREXIA, INTERNAL BLEEDING… Undoubtedly one of the best releases of the year in this genre!!" Excuse me, but let’s cut through the bullshit and call it what it is – boring brutal crap full of triggered as fuck drums, low guttural growls and forgetable riffs played at breakneck speed without any groove whatsoever. These days almost anyone with a minimal knowledge of music arranging computer software can record such album which will sound clean, fast and even technical (I know it, because I’ve done it myself, haha), so I took liberty to check their live videos on YouTube at least to see if they can deliver the same quality live, and guess what? No, they can’t, and to have your drummer play live with earphones and with trigered drums, that’s not brutal, that’s fucking pathetic. In short, stick to the aforementioned bands and thank me for saving your ears from this torture. www.facebook.com/pages/reincarnation/191772984181177, www.xtreemmusic.com