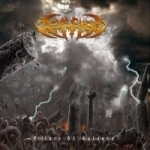 After the demo (2007) and their successful MCD "Human Vivisection" in 2009, which was quite well received by the world wide underground, Joe and his warriors finally present their first long player. After having released the debut on their own the horde found a new home in Coyote Records from Russia to spread their brutal madness onto the entire planet. The native base of the band, Taiwan, is mostly known for its more accessible bands like SERAPHIM or CHTHONIC. Both might be quite well known here and can be considered as pioneers of the scene from that Far East Asian island. REVILEMENT don’t have anything in common with those acts as this four piece holds the flag of technical and brutal Death Metal for all Taiwanese deathbangers high. So it’s no big surprise that the eleven (seven completely new and four re-worked) raw chunks of bloody flesh can easily compete with any release from Europe or the States. Of course there is still a gab to leading acts of the genre for these Asian sickos (Joe is the a born Canadian native by the way) but "Pillars Of Balance" is a solid slap in the face for all lovers of that style. Their tracks sound interesting in my humble opinion and have something to offer for fans who worship and being really into that kind of music. The quartet combines some brutal old school elements together with the technical side of the new school – and it works quite well. I like the sound of the drums (especially the snare) much more than how the majority of bands in the brutal department deliver it. Axemen Allen comes up with some cool twisted and weird riffing / lines and rhythms sometimes but he uses the standard technical & straight guitar patterns / formula as well. Hence everything flows. The drum work is skilled, a lot of rhythm changes, fills and that stuff but still good to listen to and to follow. Joe’s vokills deliver the expected lethal dose of low grunts and gore, puking guts all over the place. The production of the album is quite good for that kind of music. All instruments can be heard clear and (like I mentioned above) the good drum sound makes this one enjoyable to listen to for me. The disc might not be the newest revolution but it’s a solid piece of intense Metal and any supporter of brutal Death Metal should at least check these guys out. www.myspace.com/revilement, www.coyoterecords.ru. And who knows? Maybe they will be seen over here soon (due to their European based label) as they were / are always guests on a lot of important festivals in Asia. Trivia: the band also participated in the "All For None, None For All: A Tribute to Peter Steele" compilation covering the classic CARNIVORE tune ‘Sex And Violence’.