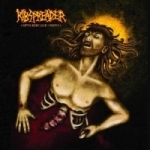 Hey ho, let’s headbang! After 2 EPs, a split with MACHETAZO and a compilation of early recordings, Sweden’s old school Death Metal sickos return with “Opus Ribcage”. Unfortunately, Dan Swano didn’t play on this disc but the band does just fine without him. After the lilting, acoustic, self-titled intro, the RIBS blast into the charmingly titled ‘Dying Dead Decomposed’ and the intensity and speed don’t let up until after the disc ends with a cover of the RAMONES’ classic ‘Blitzkrieg Bop’ (here called ‘Blitzkrieg Pop’). Trust me, there’s nothing pop at all about RIBSPREADER. Their music takes me back to the early 90s during the heyday of Sunlight Studios and bands such as ENTOMBED and DISMEMBER but the growled vocals are deeper and more gut-churning. Frontman Rogga even manages to mix in some eardrum piercing grunting during a few tracks. If you like your Metal short and unsweet with not an iota of filler, check out RIBSPREADER’s latest opus now! www.myspace.com/ribspreaderofficial, www.vicrecords.com