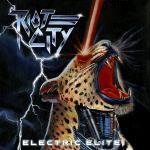 A couple of weeks ago, these five Canadians of RIOT CITY played at the Keep It True Rising Festival in the south of Germany and everyone who was there or even just has been watching their gig on YouTube, is totally convinced: this band is simply outstanding. They keep the flame of Heavy Metal burning and literally lay the soul into their Rock’n’Roll. After the first album “Burn The Night” was recieving extraordinary good critics back in 2019 when it came out, the expectations among the fans were pretty high until they played the new songs ‘Beyond The Stars’, ‘Tyrant’ and ‘Ghost Of Reality’ on that festival and they’d fit perfectly in between their old material, still featuring this enourmous high screams of frontman Jordan Jacobs, still playing with twin lead guitars and transporting this special feeling. The feeling Heavy Metal needs to have to make the music electrify you. The footsteps of mighty JUDAS PRIEST are impossible to fill for anyone, but these five crazy Canadians are seriously goddamn near to it. But, stop! There is much more in that record than PRIEST, there is sparkspraying riffs in songs like ‘Return To The Force’ or ‘Eye Of The Jaguar’ which are Speed Metal to the bone, there are hooklines like in ‘Beyond The Stars’ catching the listener not willing to let loose again. Their joy while playing, their passion is tangible. Tracks like ‘Tyrant’ or the really early 80s Metal sounding ‘Paris Night’ which are slowly stamping through the mid-tempo develop even good classical moments, letting one think about MERCYFUL FATE and still, well have a look at their logo and guess what, early IRON MAIDEN. All in all, it’s still much more than just copying old heroes, RIOT CITY pick up the energy and lifestyle from the music from fourty years ago and transport it to the here and now. So folks, this is it! People are already discussing if this is their album for this shitty last twelve months. Is “Electric Elite“ the holy grail for this year? Maybe, when it comes to exactly that type of sound, they have maybe only REDSHARK from Spain with their “Digital Race” album to compete with. Hard race, comes maybe to be a photo finish. RIOT CITY got it with half a nose length in the front! Great album. More info you will find at: www.facebook.com/riotcityofficial, www.facebook.com/noremorserecordsgreece