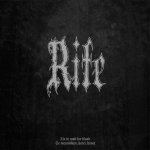 Gothenburg, Sweden’s one-man band RITE have released a compilation "Lie In Wait For Blood / Se Menniskan, Hatet, Hånet" containing the "Lie In Wait For Blood" demo and the "Juridical Doctrine" demo. Never having released a full-length studio album, T.E. (vocals and instruments) is still able to put forth a cohesive combination of tracks with pure Black Metal vibes and also enough diversity to set it apart from other bands in the genre that basically rewrite the same song over and over. The first track ‘Lie In Wait For Blood’ is a fire-alarm of an opener with wailing, screeching guitars and vocals similar to Nord of MALIGN. ‘Plagues To Come’ sways and smothers in a mid-tempo atmosphere. The third track ‘Funerals’ is classic Black Metal with fast, steady drumming mixed with a murkiness in guitars that remind us why we listen to the genre to start with. ‘Reaper Manifest’ starts with somber guitars before diving headfirst into a furious, yet melodic track. An ominous voice speaks before ‘Juridical Doctrine’ gets going, with what sounds like some Satanic High Lord preaching the gospel of filth. Gurgling vocals permeate throughout the song as the guitars swing from side to side in a pendulum of terror. ‘Malachi 4:1’ could almost be an early DARKTHRONE track before coming into its own in a phantasmagorial mist-enshrouded blood ritual. The HELLHAMMER cover ‘Messiah’ is a rocking, fist-pumping song that, in its own weird little way, fits in nicely within this compilation. Maybe one day we’ll get to hear RITE’s first full-length. But in the meantime, it’s hard to go wrong with this set of tracks. For more information, check out www.facebook.com/rite-259908237370179, www.chaos-records.com