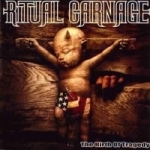 There’s no doubt in my mind that Thrash Metal music is much more devastating when played at fast pace rather than using slow paced material and it’s obvious that RITUAL CARNAGE have understood that for “Every Nerve Alive” and on their new offering. Opening in a furious 80s Thrashing fashion with ‘The Sixth Sense’ followed by the title track, RITUAL CARNAGE confirms that they don’t want to bury their roots unlike so many of their once great predecessors and deliver a mixture of “Beneath…”, DARK ANGEL “Leave Scars” particularly evident with ‘Burning Eyes Of Rage’ (being very similar to ‘The Death Of Innocence’), PESTILENCE (Las Vegas outfit) and similar devastating acts. I heard comparisons with the once killer Bay Area Thrash scene but I for one can’t find much in common with those bands because the riffing approach is different, the solo work can’t be compared either as their delivery is inferior and another point that separates RITUAL CARNAGE from the Bay Area are the vocals as Nasty Danny’s singing is simply monotonous and certainly the weak point here (if there’s one) as he simply doesn’t sound convincing unlike Urbinati, Ronsdorf or Fisher were for example. This point and a few fillers such as ‘Paradox Of Democracy’, ‘Sanity’s Thinline’ and ‘Psycho-Sadistic Psychosis’ are the only flaws that I can think of as the production is really excellent on the other way, delivering a sharp guitar sound and a powerful yet maybe too synthetic drum sound. Definitively one of the best Thrash releases for 2002 along with the untouchable new DEW-SCENTED album. Oh yeah, let’s not forget the good but not killer (the vocals being not so adequate) cover of ‘Infernal Death’ in memery of Schuldiner. Die hard collectors will note that the digipak version has two extra tracks and the vinyl has a bonus 7″ included.