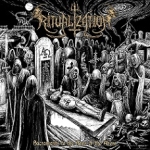 RITUALIZATION
Sacraments To The Sons Of The Abyss
(Iron Bonehead Productions)
60:59min

The French have always supplied a variety of Black Metal styles from MUTIILATION, to VLAD TEPES to VERMETH and so on. And RITUALIZATION carry on the tradition with blackened Death Metal in a chaotic style reminiscent of everything we love about the genre. The chugging rhythms and putrid, filthy vocals create an atmosphere not unlike being trapped in a dark corner while a being from the pits of hell rips you from the inside out. After the intro, ‘Conjuration Of The Howling Depths’, ‘Last Rites To The Damned’ gurgles and screams, blasting its mangled way into our ears with the fury of one hundred bloodthirsty raiders. Third track ‘Genesis To Your Curse’ continues to regurgitate its acidic angst without a second to catch your breath. ‘Herald Of Betrayal’ stands tall, like a giant surveying the ant-like populace below. Doom-laden guitars and drums hold this track together while vocalist Warchangel threatens with a growling mass of abominable hatred before charging into the song full-force. And like any mauling, the fifth track ‘Graveyard Coven’ leaves a stench of death behind. Lightning-fast guitars from Da’ath and Infamist bludgeon you with face-pounding annihilation. ‘Beneath The Sepulcher" rattles and rapes our mind with more consistently Metal devastation. Track by track until the end, this album simply never lets up. Once over, the exhausted headbanging victim will demand a second listen. Then a third, until all that’s left is a mutilated husk of blackened Death Metal bliss. RITUALIZATION is a band on the verge of becoming something monumental, and they’re only one full-length in. Do not let this album slip past you. For more information, check out www.facebook.com/pages/ritualization/145905645471417, www.ironbonehead.de