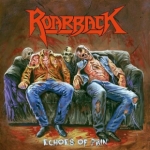 Young Danish Thrashers in ROARBACK obviously love to thrash – and they love VADER, too. Well, at least I was associated by those two particular things right away when I was spinning ROARBACK’s debut album "Echoes Of Pain" in my super-slim Dantax player a few times in a row, within the past 3 – 4 days or so. So, if you like both Thrash – and a nice and blistering solo and riff work that could have been borrowed either from Jeff (R.I.P. bro) or Kerry of SLAYER, added with a few things from the Polish Death Metal torpedoes VADER (specially vocal wise), then in that case you may throw some of your hard-earned cash stream toward ROADBACK’s direction too. A kinda sad thing is, however, that ROARBACK – no matter how well they do their own (copycatting) thing, haven’t been able to set the bushes on fire in any different way than so many other bands have already done before with their past and current releases. There’s definitely some potential there in ROARBACK’s ‘we will come and crush yer weak skull’ type of musical message, but unfortunately the first strike should always be deadly. With "Echoes Of Pain", you are just gonna lose a couple of fingers – and that’s about it. I will give them some hope though when it’s time to put out their follow-up album, as I am a pretty darn generous muthafukka. Seriously. Of course more about these young Danish Deathrashers can also be found, at www.facebook.com/roarback, www.mightymusic.dk