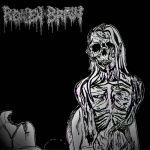 ROTTEN BRAIN is a French Death Metal band and this is their second demo. This release sees the addition of Eddy Polo, a full time drummer for the band. This self-financed demo clearly sounds like what a good self-financed demo ought to be, a buzzsaw of downtuned cavernous riffs coupled with good drumming. This is good paced Death / Doom and it springs to life on tracks like ‘Man In The Madhouse’. Though the approach to drumming is akin to a standard Death Metal with the riffs rising to the pace alongside, it’s the slower moments where the band truly shines! The vocals are straight out of a swamp and fit the overall atmosphere very well. Though combining the spirit of Doom on sections of all songs ROTTEN BRAIN is essentially a Death Metal band which operates out of a dungeon. Just think of this release as an excellent tribute to the early 90s Finnish / Swedish demos, but with a better sound. Right from the first minute of the first track ‘Beauty Of Decay’ you know you’re in for a treat, the vocals, riffs and the drumming just come together really well to construct an image of sonic decay. Track # 3, ‘Theater Of Horror’, is a perfect representation of the aforementioned old school nordic sound. Bloody relentless and the band’s got not a second to lose. It’s my favourite track from the demo, utter destruction from start to the end. The band’s firing all guns here! I suppose a better production could only enhance the overall atmosphere in which the band operates to add in further depth to the sound, however I actually like the sound as it currently is. A shout out about the bonus track ‘A Slow Agony’ which is a fantastic representation of the title. A muddy instrumental mirroring the descent into darkness of the mind, well done! On the whole this is an excellent glimpse into what the band is looking to do. There is no delicacy here, it’s just an all out assault. Fans of old school Death Metal will gravitate towards this immediately. Fans of newer sounds should definitely give this a shot. For a demo, this is well put together, the approach to songwriting is pretty standard, but has been executed quite well. I’m hoping they’ll release an EP soon, that should be fun. Recommended! For more information please visit https://rottenbraindeathmetal.bandcamp.com