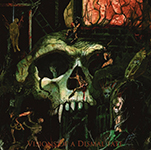 With this band name and album title everyone is immediately on fire, I guess. ROTTEN TOMB are spawned from the depths of the Chilean Death Metal scene and active since 2016. “Visions Of Dismal Fate” is their debut and hopefully the start of a long and successful career. Like back in the old days, where not everything was always better, but different, the band released four demos plus two EPs and even a live album. Although I would not call it an album, because it only has three tracks, but that is just an unimportant marginal note. The playing time is divided into eight songs and what impressed me the most is the almost continuous flow of excellent Death Metal. All instruments including vocals are fitting perfectly together. That is songwriting on the highest level and even if I searched for a weak spot I simply could not find one. On the whole, the style can be described as an unholy mixture of early IMMOLATION and INCANTATION with a heavy Doom Metal influence. But do not be fooled, ROTTEN TOMB are often a little more subtle than acts like ASPHYX for example. Which means, the Doom Metal elements are not hitting the listener like a steam hammer. Instead those components are artfully woven in mentioned American Death Metal. Another source of inspiration are the very early works of AMORPHIS and PARADISE LOST, when both bands were filed under Death Metal. All in all “Visions Of Dismal Fate” is an excellent album and highly recommended for every Death Metal lunatic. More information can be found here www.facebook.com/rottentombband and here www.facebook.com/cryptsofeternity