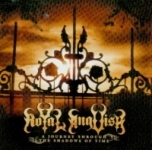 ROYAL ANGUISH
A Journey Through The Shadows Of Time
(Fear Dark)
44:10min

”… again they bring a mix of extreme Death Metal and more commercial Gothic Metal in a very unique way, like they did on their previous release ”Tales Of Sullen Eyes”. Nice quotation, isn’t it? Well, I really might not be the right person for this, but someone has to do this here, hrhr! ”A Journey Through The Shadows Of Time” is split-up in two parts. The first part is sounding like a cheap mixture of Cradle of Filth, German Crematory and boring progressive Death Metal, combined with boring and more than monotonous Death Metal-like vocals. Variety should bring the use of the female voice, but it also fails, as it is sounding quite disturbing all the time. The second part of that album promises a lot, but after the well-sounding intro the same stuff will crush your nerves, too. I just can imagine small chubby girls with too tight velvet skirts and pimples who could like that kind (of) music. Probably for that species this could be ultra-evil and brutal. The best thing on that release might be the spoken intros between the songs of the last part (called ‘The Battle Of Jericho And Enon’), as they remember of ‘Defender’, you should know that song of Manowar… www.royalanguish.com, www.fear-dark.com