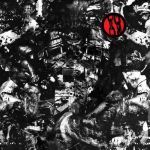 Abyss calls life… again! RUIN LUST are one of 20 Buck Spin’s more recent acquisitions and an undeniably crushing force of chaos too. “Choir Of Babel” deserves adjectives starting with an M exclusively: mantric, massive, malignant. ‘The Choir Of Babel’ literally crawls out of the stereo set right before exploding into pounding blasts and fast-yet-sludgy riffage. The pace is set and it’s easy to lose yourself within the serpent’s coils. A simple but well structured formula is what RUIN LUST stick to, and it’s all good as far as I can see, with their growls echoing through charcoal caves and the not too long full-length album burning its fleshly fuse quite fast. ‘Rite Of Binding”s illusory finale leads to yet another detonation of slimy Death Metal, so mind your cochlea! By the way: one of these guys used to play live in killer group ASH BORER, so, you know, ’nuff said. Vinyl fiends will have to wait until March 13th for the official release. In any case, make sure you evoke those tyrants using the following spells: https://ruinlust.bandcamp.com and www.20buckspin.com.