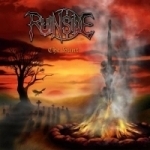 Danish Mighty Music went far out for fishing, and returned back to the home shores with a wide smile being spread all over the face. They found the Finnish Thrashers RUINSIDE being tangled tightly into their strong net. Formed in around 2005, and a couple of demos and EPs later, RUINSIDE’s debut album, "The Hunt", was ready to be unleashed in the end of 2012 via the label, containing of twelve songs + intro. This five piece act do their Thrash stuff – with some overtones from pure Heavy Metal, if not greatly but really damn well, sort of reminding me of TESTAMENT at times, then Swedish prog-ish Thrashers PATHOS at some other times – and even bringing out SACRED REICH’s name here and there for a passing moment. Strongly riff-based, harmonious, amazingly catchy, powerful yet surprisingly hook-filled progressive Thrash Metal this is, from start to finish actually – and having such a gifted vocalist like Toni Salminen truly is (did someone mention Chuck Billy’s name in comparison to Toni’s voice?), things are basically locked into a very favorable order for them for their world conquering. One of RUINSIDE’s best assets within their sound is, to have enough variety and hooks in their songs. The guys are able to use their Thrash -gear really effectively on "The Hunt" – just like such songs as ‘Shower Of Accusations’ and ‘T.O.R.T.U.R.E’ prove it clearly enough. They are also able to tease us with some very muscular, testosterone-oozing and epic sounding stuff like a song called ‘Witch Hammer (Malleus Maleficarum)’, which actually gets easily stuck into mind right at first listen already – and when it comes to some calmer seas musically, a song titled ‘Forced Confession’ – performed by acoustic guitar, cello, double string bass and violin, offers something totally different compared to the rest of the material on the album. There’s pretty much a whole spectrum of good ideas used in the songs on "The Hunt", making it a somewhat great debut for RUINSIDE to continue their march onward toward new challenges and victories. More about these Finnish witch hunters in RUINSIDE, at: www.ruinside.com, label: www.mightymusic.dk