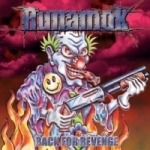 The history of RUNAMOK is a little bit confusing to me and I’m not quite sure whether “Back For Revenge” is really the band’s debut album or not… There’s also talk about another full length called “Make My Day” (also from 2004), but maybe that never got released officially?! Who knows?! Anyway this German four-piece was founded in the summer of 2003 by guitarist / vocalist Fabian Schwarz (STORMWITCH / FALLEN 2 PIECES) and guitarist Olli Kaufmann (ex-TYRAN PACE, VINDER) in order to play some old school Speed / Thrash Metal. The line-up was completed by two more experienced people, namely FALLEN 2 PIECES drummer Mario Schmitt and APOKRYPHA bassplayer Freddy Schartl. After a rather quickly released demo CD (still in 2003) they constantly must have written material like crazy, cause apart from the aforementioned twelve “Make My Day” tunes, there’s another ten own songs, as well as a cover of MÖTLEY CRÜE’s ‘Looks That Kill’ (!!) on their newest offering “Back For Revenge” again. Musically RUNAMOK sound pretty dated (meant in a positive way here!) and might appeal to anyone who could imagine a nicely balanced mixture of older MEGADETH with some METALLICA overtones (“Black Album” period) – not completely convincing yet, but at least performed in a very skilled manner and produced very professionally. It may sound strange, but Fabian’s vocals actually sound as close to Mr. Hetfield as to Mr. Mustaine, only depending on the mood of the particular song. Same goes for the music. Sometimes it’s more technical structured, thus it sounds pretty much like MEGADETH, while the catchier riffing easily recalls METALLICA again. The rather silly coverart won’t necessarily help the album’s sales, but if you’re in the mood for some old school Metal once in a while, you might check them out without any prejudices. For all further info check out www.runamok-rocks.de. Label contact: Metal Axe Records, Kortumstrasse 16, 44787 Bochum, Germany, info@metalaxerecords.com