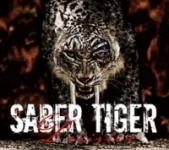 SABER TIGER is the creation of guitar wizard Akihito Kinoshita who gave birth to this metallic beast already back in 1981. Hailing from Sapporo, this great Metal band has already a huge back catalog and belongs to the top Heavy Metal outfits from the land of the rising sun. It’s a really strange why this superb squad isn’t more well known overhere in Europe as it should actually have the same degree of popularity like their fellow country men from LOUDNESS or ANTHEM. One is for sure: it might not be the music as these Metal warriors delivered excellent, pure and honest music throughout their more than three decades of existence. Anyway let’s focus on their latest recording "Decisive" which marks SABER TIGER’s 12th full length studio album (not counting the countless demos, EPs, live or compilations albums). Backed with a new label, this five piece high energetic Heavy Metal machine provides more than sixty minutes of lethal metallic fury. After a short intro the album starts with ‘The Hammer’ (a quite suiteable song title) which is a speedy opener with a slight thrashing approach in the riffing. ‘At The Front’ continues the energy of the first track with just less speed and more emphasis on heavines. Also here you can hear some Thrash Metal influence in the guitar work spiced with some nice grooves which gives the stuff a slight modern touch. This formula works with almost every track of the album. Even the material of this twelve tracker has its roots in the tradtional Power / Heavy Metal department it doesn’t sound old fashioned in any way. Much more it is quite hard hitting and fresh and it is able to transport their old school sound into the present. You can hear that the members behind the band are no newcomers to the scene as every note and riff fits perfectly. The guitar work of axeman Akihito is exceptional skilled and virtuous yet song orientated. The drumming is extremely tight and powerful and gives the tracks the necessary punch. "Decisive" also marks the return of well known singer Takenori Shimoyama again who replaces frontman Katsuro who had his appearance in the predecessor "Indignation". The production of the disc is quite powerful and leaves nothing to be desired. It was done by the band itself and was mastered / mixed in Germany by Tommy Newton. The only flaw I can find is that the album with its running time of more than one hour seems be a bit too long sometimes. Maybe two songs less would have been better. Nevertheless this is high quality stuff and value for money especially if you consider that this nice digipak features a bonus DVD with a show from the "Unstoppable Bullet" Tour in 2011. Some of the album’s highlights are ‘Light Thunder Light’ (a Speed Metal bonus track), the uptempo tune ‘Angel Of Wrath’ or the crispy mid paced track ‘Defying Gravity’. In case you haven’t heard SABER TIGER up to now just visit the band’s website at www.sabertiger.net and get your copy of "Decisive" and don’t forget to check out their old releases as well.