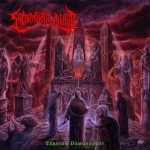 Perseverance and dedication are very important values in every kind of noncommercial music, supporting the efforts of musicians with strong attitude who just desire to be creative without compromises. Those values are strong in SACRAMENTAL BLOOD, an expert trio from the Capital of Serbia, Belgrad. Since 2002 they proudly keep the flag of the traditional Death Metal, and to be clear, they are faithful to the masters of Tampa or some other sunny place in Florida, I mean DEATH, DEICIDE, OBITUARY, MONSTROSITY, DIABOLIC and so on. It’s really undeniable to think about those bands when just the first track on "Ternion Demonarchy" starts on your player: ‘Demonized’ is in fact a violent assault to your ears, with a very fast introducing riff and a hyper fast blast beat that shows its aim from the beginning, like a boxer who corners the rival just after the sound of the ring. Technical riffing and modern extreme drumming immediately feature as main elements on this album, the first of their career (just a couple of demos and two splits came before). Another emerging element is the typical production of this kind of Death Metal nowadays, with an overwhelming use of plug-in, compressors and triggered drum sounds. I’m actually tired of listening to bands produced in this same way, I’d like to listen to new technical Death Metal albums with less editing and natural sounds, that emanate only sickness and aggression, but that’s the only relative criticism that I’ll do to these guys. However, all in all, it’s the production you expect from Stefano Morabito at 16th Cellar Studios (HOUR OF PENANCE, FLESHGOD APOCALYPSE and many more). "Ternion Demonarchy" will please every fan of American Death Metal the way it has to be. A strong point here is surely the voice of Srđan Todorović, a mix of John Tardy and Glenn Benton (it’s evident above all when he superimposes rasp and guttural lines), which is not just an illusory comparison, he really makes a good job behind the microphone. The guitar work of both Todorović and Milan Dobrosavljević is worthy as much of praise even if it’s sometimes a bit derivative and repetitive, as is the drumming of Ivan Petrović, which nonetheless proves to be striking and powerful especially with his hammering double kick drum technique. "Ternion Demonarchy" is composed of seven songs with the addition of two interludes and an outro: all the material is on the same level and it’s hard to select the best track, maybe ‘Sanctimonious’ and ‘Livid Deaths Descend!’ have something extra. A final mention is for the superb cover artwork of Juanjo Castellano that visually describes entirely the demoniac lyrical concept. Therefore, SACRAMENTAL BLOOD have all the credentials to have an important role in the European Death Metal scene, so be sure to support them at www.facebook.com/pages/sacramental-blood/216271558393570, www.facebook.com/minerrecords