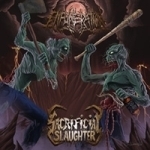 American, Death, Thrash… For sure one is not fooled after the play button has been pressed, for SACRIFICIAL SLAUGHTER and ENFUNERATION really do bring these words to the listener’s mind after the first notes start to drill into the brain. Being signed by Horror Pain Gore Death Productions surely means quality. And I acknowledge that both bands really do pull it out in a pretty professional way. They have the rage and the guts needed if you want to call yourself a dedicated person. But (and there’s always that tedious “but” lost in the middle of the review that gives an essential contrast to the nice words of introduction…), I said “but”, SACRIFICIAL SLAUGHTER leaves me thirsty for more… identity. This band plays tight, raging deathrashing Metal, and works pretty well with the 2 singers (one growler and the other one spewing good shrieks), the sound is ace (though the drums might have been less clinical sounding, I would have preferred them), full of medium and damn solid (the clearer and most powerful production on this split album), there’s indeed a good dynamic throughout the whole recording of the band, and the soli parts are skilfully executed. Still, every now and then, I sense strong hints of influences that kind of prevent me of fully enter into the music of SACRIFICIAL SLAUGHTER. The first riff of the first song called ‘Reign Of The Hammer’ reminded me too much of MASTER’s opening riff in ‘Pay To Die’. Later on, there’s a pretty strong DYING FETUS touch in the “groove” of ‘Ruthless And Truthless’. And ‘Compound Fracture’ reeks of CANNIBAL CORPSE riffage (à la ‘Hammer Smashed Face’). Of course, the bombastic aspect of the production, plus the real skills of these musicians really do manage to take the listener to the shores of ballsy Death Metal on thrashing dope. But in the end, I am not conquered, I am not sweating blood from each parcel of my brain and I am not eagerly crying for more until I collapse. If taken as a fertile ground on which progression and identity are the needed seeds, this side of the split album shows that SACRIFICIAL SLAUGHTER will definitely come up with a more interesting record next time. Now let’s switch to ENFUNERATION. Whereas SACRIFICIAL SLAUGHTER goes more for the “straight in your face violence and brutality”, I can easily say that the world of ENFUNERATION withholds more darkness, yet maintaining a good level of brutality. Somehow the overall atmosphere created by this band puts me in a “SUFFOCATION meets KRISIUN and BRUTALITY with feeling” mode. That’s more the overall atmosphere, because ENFUNERATION is luckily not threading the path of total technicality that can be quickly boring. This band manages pretty well to mix up a decent use of technicality and feeling (I think especially of the pretty eerie soli every now and then). Not the Death Metal revelation of the century, but this sounds damn honest, grim and to the point. Actually, this band sounds way more Death than Thrash Metal, but that’s obviously not a problem at all. I like the very interesting structures of the songs and some riffs are instant hooks slashing my neurons. Not a bad sign. The voice is also powerful and fits the music very well. A band with a very good potential, that’s a fact. A pretty decent split release, not changing the face of the Death Metal microcosm, yet it avoids the too full garbage of utmost mediocrity we’re sadly used to in these days of plastic metal. All the best to HPGD Productions. www.myspace.com/championsofmetal, www.myspace.com/enfuneration, http://hpgd.comoj.com/index.html