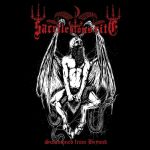 After three splits and an EP, Saarland, Germany’s SACRILEGIOUS RITE has unleashed a beast of an album. In its blackened Death mode, Ex Ipsis-Mors has written songs to stagger the seething demons within our soul. More Black than Death, the first full-length "Summoned From Beyond" presents a culmination of old school tracks that consistently deliver song to song. The opening intro ‘Missa Nigra’ consists of chants, whispered words and some animal cries in the background before shattering into a maelstrom of chaos with ‘Sacrilegious Rite’, a track of thrumming guitars and hellish, pounding drums. The lower-style of vocals suits the sound nicely as if growling from the bottomless pits of hades itself. ‘Coronatus Rex Mortis (Morbid King Of Devastation)’ takes off running at high velocity before swaying back a little with its mid-tempo guitars and drumming, then spiraling back out of control throughout. ‘Deathstalker’ is an energetic piece that doesn’t let up in the album’s intensity and power. ‘Nocturnal Blood Consecration’ is more monstrosity from this glorious band. SACRILEGIOUS RITE are a breath of fresh air from the sometimes wandering, sometimes bland bands of the same genre. We all listen to Black Metal for our own reasons. But I’d imagine most of us can agree "Summoned From Beyond" is a hell of a debut. The sixth track ‘In Absence Of Light’ is another smash in the face of abominable fury. And then there’s the female vocals at the beginning of ‘Remains Of The Deceased’ rudely interrupted by the screeching rasps of Ex ipsis-Mors who shoves the melody aside for filthy, rotten grime on the heel of our boots. ‘I Believe’, ‘Strigoicia’ and ‘The Lost Sheep’ all blend together to wrap the album up nicely. Is there anything necessarily new on "Summoned From Beyond’? Not really. But do I want anything new on this album? Absolutely not. The non-stop black-souled tracks on this album are a near perfect combination to satisfy any listener. For more information, check out www.facebook.com/sacrilgiousrite, www.dunkelheit-produktionen.de