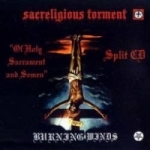 D.O.G. Productions returns with another release of unholy blackness (limited to 300 copies), after their successful and now rare collector’s edition Impiety 7" ep of a couple of years ago. There are two words to describe this split-CD; totally cult. Sacrilegious Torment kicks things off with a parade of six tracks of purest Profanatica worship, followed by three Havohej and Blasphemy influenced hymns by Burning Winds. No, there is nothing original here, and the songs are as minimalist as they get. Burning Winds seem on the verge collapsing into total chaos at times, and the primal production makes it an even tougher listen. But I doubt you were expecting anything less from D.O.G. Productions! The layout is as minimalist as the music and features lots of inverted crosses, goat heads, and pentagrams – of course. Running time is under 17 minutes (after all, there’s only so much evil a CD can contain). The label requests only the truest devotees of blackness and evil seek this release. And for good reason. E-mail: havohej822@aol.com