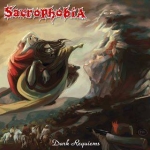 Xtreem Music from Spain resurrected another Death Metal memento. Being active only for four years, from 1990 to 1994, SACROPHOBIA released two demo tapes ("Only Death Is Irreversible" and "Demo #2") and two tracks on a split CD called "Dead Flesh" together with AVULSED, FERMENTO, ANTROPOMORFIA and SPONTANEOUS COMBUSTION. Furthermore five songs, recorded live in in October 1993, are added. And although I understand the aim to put all available material on one release, those live tracks are virtually inaudible. I guess the skip button was exactly invented for such affairs. But do not be fooled, the other material by the Spaniards is some excellent underground Death Metal with some Grindcore influences here and there. You have to be really grateful Xtreem Music making such small highlights from the past (like this one or the recent HUMAN WASTE compilation) for public accessible again. That is the way Death Metal sounded back in those days. www.facebook.com/sacrophobia, www.xtreemmusic.com