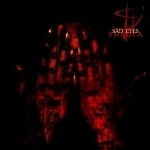 The first thing you’ll notice about this band is the number-word play. The album title is, I think, supposed to spell “Phobia” with numbers and letters. Seems clever at first, but then not only are all the songs titled in similar fashion, the music itself seemed broken up between melody and brutality. With little to no transition, songs will simply stop and start up again with a different tempo. This practice isn’t new, it’s a facet of technical Death Metal and, sadly, the heinously bad Deathcore genre. Breakdowns! No, thank you. However this is not a Deathcore album – merely, like many melodic Death Metal albums from the mid 90s (in the wake of AT THE GATES) contain elements which even lesser bands would steal and trope into their incapable songs years later. Plus, the songs are just totally uninteresting. As a concept, too, the album wears on the patience. Even for those songs which stand out, such as track 4, ‘A9H3N9H05’, the infernal number and letter scheme wears the album out prematurely – to the point where the listener no longer wishes to learn more and experience more from the band. www.sadeyesband.com, www.facebook.com/pages/sad-eyes/248350088526877, www.razedsoul.com