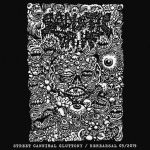 SADISTIC DRIVE is a Finnish Death Metal band. So far they have release a demo tape in 2018. This, their second release courtesy of La Caverna Records, is a CD re-issue of their demo tape including a decent sounding rehearsal recorded in May 2019. The demo tape includes 4 songs and clocks at almost 9 minutes. It is a filthy and raw display of Death Metal. It screams analogue and it has a great early 90s atmosphere, specially the dirty and crushing guitars. The bass guitar is also very present, with a huge distorted tone. The drums just wrap up the package, as they have a huge, organic and natural sound. Now, Jusa Janhonen took care of playing all the instruments. And maybe his performance is a little sloppy, but I think that adds a bit character to their style. Niklas Heiskanen’s vocals fit in perfectly. He uses a bunch of styles, from gurgling screams to deep growls and everything in between. Now, I am not too fond of rehearsal recordings these days. I mean, back in the 80s and 90s, rehearsals were a great and inexpensive way to spread the word around. Most new bands had to come up with money to get a decent recording. But nowadays, you can get a good home recording if you have a computer and a couple mics. I mean, I get the idea of offering some new material on re-issues, but I would’ve waited a bit longer to have a couple songs with better production to include as bonus. There is a noticeable and obvious 90s Finnish influence in this material. The band needs to develop and grow their style and identity and I only wish they included more material. All in all, SADISTIC DRIVE is a good Death Metal band. Contact them at www.facebook.com/censoreddrive. Get their stuff at www.facebook.com/lacavernarecs