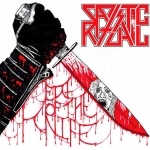 Very simply, very straight and very brutal. SADISTIC RITUAL from peach state Georgia, thrashing through their second EP “Edge Of The Knife” as if they balance at the same. With a bloodthirstiness which cannot be healthy for themselves. For that reason it might be some kind of a hint starting this record with a song called ‘Merciless Retribution’. Nothing else is going on in these 23 minutes. Besides a very few slower sections they continuously beat the living dead out of you. Politely with more than just Thrash in its most old school most KREATORish, SLAYER influenced way. You have a nice amount of Death Metal as well as even darker proportions. No gimmicks though. Just fast, powerful riffing, Thrash and blasts beats, and once in while a nice harmonic solo which is the only offering on technical extras. Some harsh vocals to it and nothing more is needed to get things straight. I believe your world won’t spin in another direction after killing your puppies to this EP. But still it’s a lot of fun and an ass kicking pastime. For further instructions how to handle a knife check out www.facebook.com/pages/sadistic-ritual/116937301673799, www.unspeakableaxerecords.com