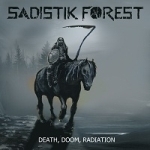 It’s pretty fuckin’ awesome how old school Death Metal has become popular again, as if this sub-genre of extreme music would have disappeared somewhere. SADISTIK FOREST, this 4-piece act hailing from the north of Finland, Oulu – Sonkajärvi – axis, has made a visit to SJEP Studios in between August – November 2011, recording 9 new tracks for their 2nd plate of infamous and skull-crushing brutalities. The band’s self-titled, 8-song debut record (also on Violent Journey Records, released in 2010) basically did impress me in a pretty rewarding way for what it was all about; following pretty tightly the same formula that so many other new Finnish Death Metal outfits (VORUM, KRYPTS, SWALLOWED – and the list goes on) have been flagging for on their recent releases. What separates SADISTIK FOREST from their companion soldiers of death and decay – well, to be honest actually nothing so much at all, which I consider a good thing, however. The fun and entertainment factors in the SADISTIK FOREST troops are, that they happen to know how to rip some flesh and leave some shredded corpses behind them, by utilizing the already existing elements within their own old school Death Metal manifest. It’s even fairly easy to read between the lines there’s this ‘meat-and-potatoes’ thing strongly involved in them – and that holds so much true for these fellows’ 2nd album, "Death, Doom, Radiation", as well. SADISTIK FOREST’s downright brutal, crispy and utterly heavy Death Metal does remind me of the current Finnish Death Metal scene – for the uncompromising heaviness and ear-provoking brutality of it. There’s a far-reaching ‘made in Finland’ flavor to it. Oddly even vocalist and bassist Markus’ both guttural and shrieking vocal styles have something very familiar in it – bringing Antti Boman’s name (of DEMILICH fame) faintly on my lips time after time, whenever he chooses to imitate a call of the mating American bullfrog. Good, good stuff here even if nothing really separates SADISTIK FOREST that much from some other Finnish Death Metal hordes of today. At least you should pretty much know what to expect from them, so it’s your call now whether you may want to check them out. www.sadistikforest.com, www.violentjourneyrecords.com