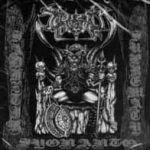 Arrgghhhh! The South East Asian underground puked out a new bestial horde once again. SADIZTIK IMPALER are hailing directly from the Sinaporean Hell and really don’t take any prisoners. This infernal outbreak of pure blasphemic Black Metal is the spear into the rips of Christ. Mastermind Zahwarlock and his comrad Hanael who played already in great local outfits like AS SAHAR, HAIL, ISTIDRAY or even IMPIETY, recruited some true warriors for the recording of their debut album “Sadiztik Syonan – To Supremacy”. This album is pure hatred and the two masters and their guest musicians Shalwend Soraths (EIBON), Fauzzt (Ex IMPIETY, HAIL) and Fyraun (ex – IMPIETY, XASTHUR, PROFANER) really did a great job here. No experiments, no compromises… this album is total destruction and sets free the total chaos. I haven’t heard such an intense Black Metal album from an Asian band for a long time. Already the first track is a total chaotic crusher and the band continues with their almost War Metal like intensity. So it doesn’t matter if you listen to songs like ‘Black Fucking Metal’, ‘Conquered By Evil’, ‘Warrior Of Satan’ or ‘Sarcophagus Of The Undead’. You will be simply reduced to ashes here… Catchy, intense, bestial but effective riffs served with fast drumming. The mostly fast pace is varied from time to time to get even more intensity. The voice is coming directly from Hell, what a maniac! These seven tracks are the seven blackened nails to every poser’s coffin. The production of the disc is raw not to say deavastating. Wimps who like a polished sound can fuck off as well as HiFi fetishists. Pure mayhem reigns supreme here. Highly recommendable for people who think the new IMPIETY stuff is not dirty enough or too much into Death Metal and who miss the early days of ABHORER (or similiar hordes). Contact www.ketzer-records.de