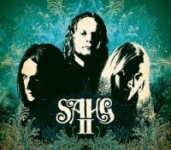 When I usually find a Norwegian band in the reviews, it is mostly an horrific Black Metal band. Now, with former members of GORGORTH, MANNGARD and JOTUNSPOR, I was actually expecting the same. Oh boy, how wrong I was. This is, as you can read in the title their second offering. The style is more traditional Heavy Metal, with a bit of Stoner / Doom Rock sound in there. This style only can go right with a good vocalist. Well, for my pleasure Olav Iversen does a great job here. He does sound a bit like Tony Martin. In fact, the sound of SAHG here can be compared to that in BLACK SABBATH in the “The Eternal Idol” era. One minor criticism would be the drum sound, which is a bit “drowned” if you know what I mean. The guitars do a fantastic job, and actually although they take it easy on the riffs and arrangements, they are clever enough to make them sound good. At a few times, they keep the heaviness level a bit below for my tastes like in ‘Echoes Ring Forever’ or the more blues orientated ‘Star-Crossed’. Again there is a BLACK SABBATH related influence mainly in the song ‘Pyromancer’ which at times sounds way too much like ‘Children Of The Grave’ and even the vocals here summons those of Ozzy. Then I can hear something more related to let’s say NEVERMORE in ‘Wicked Temptress’ (specially some vocal parts) although with less heaviness than the American band. The album closes with the longest song in ‘Monomania’ which sounds more to pure Stoner / Doom / Rock than the rest of the album. I guess some of the more die-hard Metallers will have some trouble with this not being too heavy, but at least for a change, the music is quite good, it does have a lot of roots and influences on Heavy Metal, and has a very competent vocalist. www.sahgweb.com, www.regainrecords.com