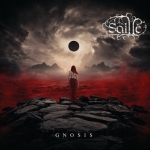 What we have here is a "symphonic Black Metal“ band from Belgium. Ugh. Enough for me to run away, but let’s give them a listen. Belgium is known for waffles, fries and pedophiles, but certainly not for Black Metal, give or take ANCIENT RITES, ENTHRONED or newer stuff like WIEGEDOOD (which I actually like). At least that one guy from ENTHRONED had the decency to hang himself, sparing the world some more sub par kiddie music. But alas, SAILLE seem to keep on carrying that torch. The influences are obvious: a little bit of EMPEROR here (without ever coming close to their genius, of course), some OLD MAN’S CHILD and some DIMMU BORGIR there. Still, with influences like these, they could at the very least come up with something catchy, but they don’t. It’s boring, stale and trite mid tempo crap throughout the whole album, with drums so horribly triggered that even Hellhammer would blush with shame. Honestly, this is elevator muzak of the worst kind… if it wasn’t for the distorted guitars and the annyoing vocals, you would hear this shit in every fucking supermarket. Let me get one thing straight: there is nothing wrong with entry level Black Metal. SATYRICON for example have a few good records and even BEHEMOTH or ANCIENT had their moments. But then again, Black Metal has to be more than Rock music or it is nothing at all. I can only wonder who the "target audience“ of SAILLE is – chubby Goth chicks? Pimply Emo boys? Nah. They have their own musical abominations, and SAILLE most certainly isn’t offensive enough ("Fuck Me Jesus“, anyone?) to lure a teenager towards the black flame. This is little more than a mimikry of a genre: the ingredients are there, but you just don’t boil a whole chicken without a recipe or spice. If you think of buying this record, wait a few months. It will end up in every record store’s bargain bin. www.saille.be, www.facebook.com/saillemetal, www.code666.net