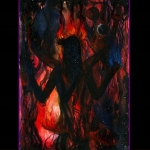 You have to give an insane amount of respect to Ván Records as they are one of the top labels churning out some great bands / material. The label seems to be hungry and with that being said we have here the latest effort from SALIGIA. The band formed back in 2006 in Norway. This is my first endeavor to listening to SALIGIA and here we go… You get 5 tracks on this album and I have to admit the sound of the vocals for this album is really not my style. They sound forced / whining and don’t mix well with the rest of the music. The music itself doesn’t sound too bad but the production could have been better for the drums. I wouldn’t classify this music as Black Metal, but more like Death Rock at best. There are slow parts with moaning vocals but like I said before the vocals really killed it for me. Overall I just could not get into this album at all. I read reviews that their previous efforts were a lot better so I will have to check those out first, but I think this album is a let down. I’d say check this album out only if you are curious but it might be best to stick to their previous efforts. For more info: www.saligia.com, www.facebook.com/saligia.info, www.van-records.de