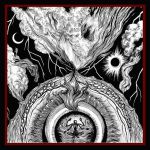 In the magnificent roster of Ván Records, SALIGIA is one of the bands that has always flown below radar level. I never understood why, because their output up to now is pretty brilliant and rather unique. The albums “Sic Transit Gloria Mundi”, released in 2011, and “Fønix” from 2015, as well as the appetizing mini album in between, “Lux Aeternae” are finest examples of the recent Norwegian or better Nidrosian Black Metal scene, as SALIGIA are from Trondheim. The special ingredient of the duo always was the deep honesty and the variability of ideas they had to create their own, unique Black Metal vision. With “Vesaevus”, SALIGIA now present their third strike against the gods. And the album keeps up the high level of its predecessors as if it is the easiest thing to do. From the doomy and dark entrance of the opener ‘Ashes’ on, SALIGIA resent their madness ridden riffing that rages through Black Metal history. Sometimes the duo puts on the handbrake, just to show a different, more gloomy kind of insanity. In other moments, I even feel reminded of Crust Punk a little bit, as far as virulence is concerned. And over all the madness, the harsh growls of Ahzari pierce the mind, mixed with nearly inhuman screams and more melodic, sometimes ritualistic singing that adds another facet to the lunacy of SALIGIA. Even though the whole album is a real highlight, there are some songs worth an extra mention, like the frantic ‘Malach Ahzari’ or the black monolith ‘Draining The Well’. Another insane tune is ‘The Feather Of Ma’at’, which somehow is a blend of VOI VOD and SATYRICON, in a manic way. The epic title track, that features some quiet parts, guided by a piano as well, ends up “Vesaevus” very worthy and fitting. So there should be no reasons for those who like their Black Metal passionate and elaborate to miss this one! Check out SALIGIA at www.facebook.com/saligia.no. And a visit to their label’s site www.van-records.de is always a good idea if you like the extraordinary darkness in music.