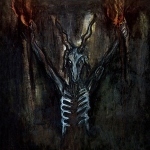 Gladly I gave “Sic Transit Gloria Mundi” a few spins. After having some trouble recognizing the beauty and diversity of this 2011 released record, it turns out to be a very compelling one. Still it takes some time to understand what is the sepulchral direction of SALIGIA, a Trondheim / Norway based two piece in the tradition of bands like DODSENGEL or KAOSRITUAL. I would call it second wave Black Metal with a huge focus on atmosphere. The sound is raw and nearly out of any bass. Whereby the focus is on the guitars. And if you give it a chance, you figure a very complex and creative thread in their dissecting tremolo guitars and haunting atmosphere. But main feature here is the captivating voice of Ahzari who also joins forces with DODSENGEL at live rituals. He groans and screeches through this record like he is been tortured to his own soulless black death. Reminding me of Attila Csihar or War Torech from TORTURIUM. And everything is put in scene very well with a raw lo-fi production which makes it to a typical Norwegian Black Metal record. Something as cold and malignant as the Nidelva at midnight. “Sic Transit Gloria Mundi” is a record which unfolds its dismal entertaining value just after a few times but then it definitely catches you. For further sins check out: www.facebook.com/saligia.info, www.van-records.de