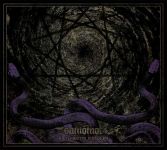 Slovenian Black / Death Metal act SAMOMOR has been around since 2008, recorded one EP ("Somnus Stellae") in 2009 and contributed to a split release ("Covenant Of The Undivine") of 4 bands in 2010 with one of their songs. "Ad Te Noctem Increatam" is the band’s debut studio album, containing of 7 songs of somewhat raw and dirty sounding Black Metal, with a slight twist taken from Death Metal’s territory. In some ways they remind me of Norwegian BURZUM; with some unorthodox avantgarde moments that they have squeezed into the songs on "Ad Te Noctem Increatam" – and then at some other times they also do remind me of German Lovecraftian Death Metallers SULPHUR AEON due to all the heaviness, grandiose assault of wall of riffs – and especially the vocal style that many other Death Metal bands would kill for. The whole album is really wrapped up with some nicely crushing atmospheres, without offering the tiniest door for anyone to escape when entering in this opus. "Ad Te Noctem Increatam" is one of those Black / Death albums that tend to surprise its listeners in the end of the day actually: it does differ from your regular pack quite a bit, which is always a good sign of things done well enough. Find SAMOMOR from here: samomor.bandcamp.com, label: www.matertenebrarum.org