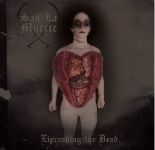 The band name is wrong. It should be SANTA MUERTE. But then again, who cares, we get the message. MUERTE… death… holy death… or doom death I should say. Coming from Australia, this debut recording went directly to be released by Dark Descent Records that are slowly becoming a force to be recognized by releasing quality music. SAN LA MUERTE is a different kind of Doom / Death Metal band with some few fast parts here and there. It might at times remind of early AUTOPSY, and in that sense of BLACK SABBATH but there is also a very weird, strange and psychedelic sound and aura in the overall aspect that gives this a more macabre feeling, although harder to digest. Imagine a slower version of PORTAL in the sense of schizophrenic musical aura, and you might get a point. At times it sounds like a ritualistic execution. So, in this age where originality is a thing from the past, SAN LA MUERTE does sure bring some new air. I just think that air is stagnated with pestilence and might not be for everyone. www.sanlamuerte.bandcamp.com, www.darkdescentrecords.com