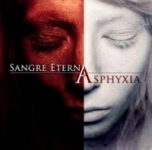 The term ‘melo-Death Metal’ usually – and most often, tends to turn me off nowadays. However, as you know there are always some rare exceptions to this rule like Serbian melo-Death Metallers SANGRE ETERNA (‘Eternal Blood’ in Spanish) have proved it to me. This Serbian bunch SANGRE ETERNA reminds me of that harder and more technical side of the whole melo-Death Metal genre that f.ex. bands Finland’s CHILDREN OF BODOM and ETERNAL TEARS OF SORROW represent for (or, at least have once represented for). Also, it’s kind of funny that I did mention those 2 names because SANGRE ETERNA’s 2nd album, titled "Asphyxia", features also quite a few Finnish guest appearances – like the brothers Juha and Jarno Kylmänen (FOR MY PAIN, ETOS), Tapio Wilska (ex – FINNTROLL, SURVIVORS ZERO, etc.) and Aleksi Sihvonen (NORTHER). This planet is so small, I guess. Having not heard the band’s debut album ("Amor Vincit Omnia") that was released in 2008 on Sleaszy Rider Records – and presumably locking their sound into this symphonic Black Metal category, the band’s follow-up record "Asphyxia" does amaze me with its real tight and mature musicianship, speaking for great volumes of almost true master virtuoso type of performances of each individual member involved in this very recording in question. There are moments on this album when my mind slips away to think of Finland’s instrumental virtuosos CHILDREN OF BODOM for all sorts of musical brilliance; for all that how they tried to push some boundaries within their technically advanced songs over the years. There’s something similar going on with SANGRE ETERNA, these Serbian fellows undoubtedly challenging themselves on "Asphyxia" song wise – and just using their sheer talent for as professional delivery of the songs as possible. And at that, they indeed do shine – as overall their playing thoroughly is flawless, many ways challenging, risk-searching – and first and foremost, pretty darn exciting as hell. It’s really difficult to find anything bad to say about "Asphyxia" so I save you from the trouble by not starting to scratch my head – just for finding something negative to say about this content wise very much enjoyable and well done album. If SANGRE ETERNA will have any luck on their side, there’s always a potential chance there that they may become something big in the future. Being a positive thinker that I am, just mark my words for that, will ya? www.myspace.com/sangreterna, www.myspace.com/maplemetal