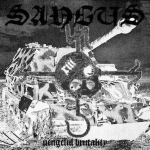 Sometimes hell comes from out of nowhere. For example from the New England states of the US. SANGUS are from Providence, RI, they started in 2012 and released this demo, their first offering, a year after. It’s tastily called "Vengeful Brutality" and features three deadly projectiles. The opener ‘Bonecollector’ is a nothing less than a fucking rabid storm of terror. D-beats meet Crustcore guitars and the sheer energy of a hell fueled machine. But beware! It’s not just Crust and D-Beat! You’ll also find a lot of influences from Thrash and Black Metal. And a fine dose of misanthropy, too. Listen to the ‘Gaspipe’, a merciless expression of pure hate, and you’ll find a proof. As a finish, we have ‘Si Brucera’, Italian for "they will burn". This one is a chaotic, yet extremely powerful and shredding cluster bomb, fired to gain the ultimate silence. But not for long – "Vengeful Brutality" is so fuckin’ awesome, I can’t stop to listen to it again and again. Too sad that I haven’t heard this killer demo in time for my last years Top 10 – SANGUS would have found their place in this list for sure. "Vengeful Brutality" is available as a cassette, limited to 200 copies, which are already sold out, according to the band, and probably there won’t be any reprint. Due to this fact, SANGUS are so kind to give their stuff away for free on their bandcamp page (where you can also get a very raw rehearsal demo with four more songs) or you can download it at this location. So please be kind, too, and check them out at: www.facebook.com/pages/sangus/494864457231431 or http://sangus.bandcamp.com/album/vengeful-brutality. Or visit this youtube link.