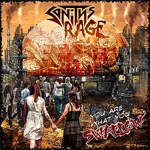 SANITY`S RAGE
You Are What You Swallow
(self-financed)
47:40min

These Belgian Thrashers are around for a decade now, but only managed to get a self-financed and critically acclaimed EP released yet, "The Rage Of One" from 2006. It took SANITY’S RAGE six more years to finally get their first album recorded and released. The reason for this long break seemed to be massive problems with the band’s line-up, the bass player and one of the guitar players had to be replaced and the drummer left just in time for the album recordings. So "You Are What You Swallow" was recorded with a session drummer. But enough for this background blah blah blah for now – let the music do the talking! SANITY’S RAGE is a true to the bone Thrash Metal band, deeply rooted in the genre classics of the 1980s, with a clear focus on the Bay Area sound. One the first look, this sounds fine, but it implies the biggest problem of the album as well. Everything sounds like I heard it before and so the most of the ten songs (plus one intro) pass me by without leaving a serious impression. Despite this, SANITY’S RAGE deliver well done and technically skilled Thrash Metal from the first second of the instrumental intro ‘The Madness Continues’. Some songs are straighter and more melodic like the speed grenade ‘Kisses With Fangs’ (one of my fave songs here), some sound quite intellectualized like the riff-orgy ‘The Wheels Keep Grinding’. Solid riffing meets melodic leads and fluent breaks, the ingredients are tasty, but the meal doesn’t taste as well. Two songs are quite outstanding though. Asides from the aforementioned ‘Kisses With Fangs’, there is the final ‘Thumbs Up For The End Of The World’, which not only has a cool title but also convinces me with fine guitars, cool grooves and the best leads on "You Are What You Swallow". But even two swallows don’t make a summer… There is no doubt about the quality of the album for sure, but about the originality. At least for my ears. But I won’t leave here without mentioning the very good packaging of this self-financed CD. It features a booklet with lyrics and tons of very fine artwork by singer Kenny Molly, done in an Ed Repka meets comic style, very colorful and dedicated. Fearless Thrash lunatics should check www.sanitysrage.com or www.facebook.com/pages/sanitys-rage/86892385807 and maybe give these Belgians a chance.