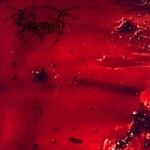 Don’t get misled by the band name and their logo – this is NOT a Black Metal band!!! SARGATANAS REIGN from Sweden play excellent, slightly technical old school Death Metal like old MORBID ANGEL, DEATH (“Human” phase) and convince – at least me – completely! This is a really good, talented underground band that managed to create 31 minutes filled with intelligent and conclusive song structures, a raw and very traditional feeling, and enough tempo variation (from fast blasting to crushing mid-tempo) to keep the album still interesting after the tenth time listening. Ex-MARDUK member Devo Andersson produced SARGATANAS REIGN and sings in this band. And damn, he did a fucking great job, although the production could be a bit more bassy and the guitars a bit louder, his vocals are just fantastic – like a mixture of Pete Helmkamp (ex – ANGEL CORPSE / REVENGE) and David Vincent on “Altars Of Madness”, not this boring growling or gurgling stuff, but raspy, aggressive old school vocals with the evil and unholy feeling that I love!!! The only thing I would like to criticise on “Euthanasia… Last Resort” is that it is such a short album and that two songs are relatively weak instrumentals, one or two songs more would have been cool, but anyway it is the first album in quite some time that I listened to three times in a row and was not bored. The hymn ‘Euthanasia’, the blasphemous, brutal ‘Evangelical Clitorial’ or the dark and heavy ‘Amon’ are some of my favourite songs at the moment and should convince any fan of classic and original Death Metal with ease. The grim vocals create an intense old school feeling and the excellent guitar and bass work show that technical finesse does not need to result in chaotic excesses like INTERNECINE or the new HATE ETERNAL, whom I found a bit stressing. Get this album, it fucking kills!!! The band’s website: www.sargatanasreign.com Label contact: i_hate_records@hotmail.com