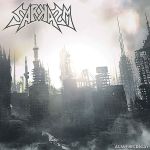 Remember the demos “Incubated Mind” and “Inner Flame”? Yes, the quality Death / Thrash demos from Canada’s SARKASM? I remember checking them out during the onslaught of demo reissues. I heard it when it was out, liked it and forgot about it. Today while browsing YouTube for some background music, I noticed SARKASM’s full stream uploaded by Xtreem Music (thanks guys!) and I just had to check it out. As the album opens with ‘Voices’ a beautiful melodic solo kicks in, leading to some traditional strong Death / Thrash rhythm. The raspy vocals actually fit in really well. I won’t say SARKASM is changing the world with this release but well, SARKASM surely has put out a solid Death / Thrash release. This is well channeled aggression waiting for that one kick to your teeth and well, SARKASM does kick your teeth multiple times during the course of the album. I particularly like the drummer and bassist on this record. Absolute maniacs, both of them! They’re just marching ahead with the closest of synergies. The leads somehow sound incredibly appropriate for 2023, while the second guitar provides a solid backdrop for their entire sound. SARKASM is having fun, they’ve put together a solid slab of metal. Track # 2, ‘Pulseless’, immediately gets the act tighter, it’s as if SARKASM has a formula for a war where they inch slowly by the second totally unafraid. “As Empires Decay” is quite well produced, the sound doesn’t jump at you like a shotgun, but rather claws at you continuously. I quite enjoyed this release and would recommend you check it out as well. The melodic solos are possibly the best part of the album, they sit high on a relentless rhythm, meandering skillfully on a skeleton of heaviness whilst being slightly bluesy and thoughtful. Yeah, it’s easily my favourite part! The bassist and drummer are next, they add a strong spine to the entire album and make it a delight to the listener. I’m pleasantly surprised to be listening to “As Empires Decay”. Recommended! More information at www.facebook.com/sarkasmqc or www.facebook.com/xtreemmusic666