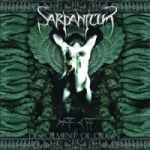 I have been following the steps of this British lot for quite some time and am delighted that SARPANITUM finally managed to release their debut despite several line-up changes. And these four blokes have come up with quite an impressive album. “Despoilment Of Origin” features brutal, crushing and varied Death Metal influenced by the likes of NILE, newer MORBID ANGEL, LUCIFERION (in some epic bits) and maybe some slightly chaotic yet tight DERANGED or even MOLESTED (if anybody remembers those Norwegians) bits here and there. Besides all the punishing brutality SARPANITUM utilize hymnic midtempo sections as well as vast epic parts with moody, majestetic leads. The Black Metal influences in the promo sheet are luckily very very marginal, more or less only present in one short section in ‘Provocation Of An Eternal Odium’. Thanks to the varied songwriting the different tempos and moods are very effectively positioned against each other, resulting in very dynamic and captivating songs. The production itself is decent, sufficiently clear yet at the same time thick enough, doing justice to the musical content. The double vocal assault – mainly low growling as well as few croaking ones are relatively understandable and are sitting well with the material. Despite some similarities in concept (lyrics and artwork inspired by Assyrian / Sumerian mythology) and sound, SARPANITUM walk a slightly different path than NILE as they use eastern scales in their riffing but are less “cinematic” in terms of using ambiances and samples. An exception is the short instrumental piece ‘Dusk Over Assyria’ which leads into the majestetic and brutal ‘Cur Defilement’ which is one of the highlights of “Despoilment Of Origin”. I must say it has been quite some time since I received such a convincing debut album of this kind of Death Metal – similar to my surprise upon listening to INSISION or HOUR OF PENANCE for the first time maybe. Everyone into the the aforementioned bands and brutal yet song-oriented Death Metal should definitely check this out! www.sarpanitum.com, www.myspace.com/sarpanitum