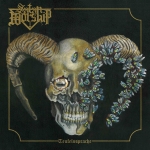 Some of the blasphemous malefactors of Brazil’s SODOMIZER, including German guitar player Max the Nekromancer, joined forces with MORGOTH’s drummer Marc “Speedy” Reign in SATAN WORSHIP, a dirty Black Thrash’n’Roll beast. The band was formed back in 2011 by Leatherface, who shortly after moved from Brazil and currently lives in Berlin. After one demo and a debut album, the latter now going three years old, the time has come for the release of the follow-up, with nine tracks of Satanism including an apt cover version of once Brazil’s finest SEPULTURA, ‘Antichrist’ (a track whose lyrics were reportedly penned by Wagner “Antichrist” before his ousting and subsequent birth of SARCÓFAGO), from the legendary split EP with OVERDOSE. The South-American feeling is very strong, with the presence of the Spanish sung ‘La Catedral’ or Leatherface’s broken English accent, a cherished and traditional mark of old school Brazilian Metal (just listen to the chorus of ‘Satanik Werewolves’). The German title of the album, meaning “Devil’s Language”, is a further dimension of the transatlantic merging present in this band. Soundwise, this is an album of, shall we say, Black Speed Heavy Metal with a strong Rock vibe, akin to the works of bands like BEWITCHED or MIDNIGHT, with a lot of VENOM and MOTÖRHEAD in spirit. The sound is organic and natural… it is almost amazing how the drums sound like an actual drumkit, not a hint of plastic to be heard in the bass drum, for example. The songs deliver the goods and you are definitely in for a true headbanger of an album. Recommended! Delve into the depths of this bastard son of two of the strongest Metal scenes of old at www.facebook.com/satanworshipofficial, www.folter666.de