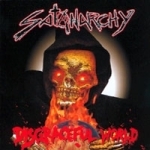 “Influenced by their heroes MOTÖRHEAD, SLAYER, DISCHARGE and VENOM…” says the info, and yes, SATANARCHY kick off with a riff they obviously borrowed from Lemmy, namely ‘Iron Fist’, just a little different. But above that you will detect VENOM almost everywhere. And SATANARCHY are doing quite a good job: although “Disgraceful World” can’t compete with “Black Metal”, for example, but on the other hand it’s better than 80% Cronos & Co. ever released. This band sounds like fun watching live, but don’t forget your bullet belt! Out on limited vinyl as well (hey, of course, this is Primitive Art Recs.!) featuring a bonus track. Cult: one song called ‘Fast Eddie Clarke’ shows SATANARCHY worshipping real Metal guitar players and condemning people like Malmsteen, Blackmore or Mustaine! These crazy Swedes make me rise from my armchair! Unbelievable!