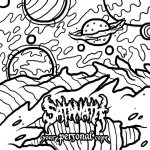 First, let’s get one thing straight. SATANATH isn’t a Metal band. Far from it (it is a solo project of Alexey Korolyov, who a.o. also runs Satanath Records, hence the name – Frank). And to be quite honest, not a lot is to be found on the project itself. However, I DO know that it’s a dark ambient, electronic mix of mellow, trippy rhythms with very little guitars and no vocals. If you’re in the mood to sit back and read a book, watch the sunset (or sunrise… I don’t care which), smoke, water the plants, fold clothes, paint war-gaming miniatures, sleep or just plain chill, then maybe "Your Personal Copy" is for you. The ‘band’ name is far from the image I imagined SATANATH to sound like. But you know what? Who gives a fuck? Why can’t we just enjoy the ambience for what it is? ‘Peitefuv’ gently tip-toes its way next to us in a keyboard-driven fog, casually whispering and breathing, while ‘Masfois’, in its simplicity, sounds like a theme to a space program getting its rocket into the inky void. Guitars that even I could play introduce ‘Inratit’ and never really leave. Just when you think some programmed drums will arrive, they stealth around in the background but don’t actually join in. ‘Movsak’ actually has some interesting layering with a rhythm that’ll keep you off balance. ‘Kiomlu’ is another track in this 80-minute offering that sort of makes me think the whole album couldn’t been recorded in its entirety in those 80 minutes. "Your Personal Copy" is a pretty simple album that asks the question…" Why?" As in…"Why do this at all?" ‘Gegnuz’ sounds like a throwaway SKINNY PUPPY track that they recorded as the theme to a documentary on desert gardening. ‘Erimop’ begins with a video game-style intro before sounding like a dreamy alarm heralding the end of everything. Though not much of a song, it does capture a stressful feel to it. I could go and on through the full twenty tracks. But you get the idea. Although the album is by no means bad, it’s just a little too simple for my tastes. The tracks don’t really seem to progress from beginning to end. But as I mentioned earlier… Play this in the background as you do other things and it might actually be soothing and enjoyable. For more information, check out www.satanath.com/distro