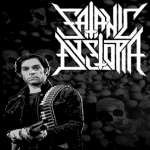 When it comes to paying tribute to their influences most bands decide to record a cover version. Or wearing shirts from their favourite bands on the booklet photo. In fact, wearing your favourite band shirt is the only reason for shooting a band photo and as a start I always check out what the musicians are wearing. To use samples from best-loved movies is also very common, but Manchester based SATANIC DYSTOPIA took it even one step further and expressed their love to 70s B-movies by putting a screen shot on the cover. It is from the movie “Rolling Thunder” and the opening sample is a quotation from “The Devil Rides Out” (German readers may know this movies under the titles “Der Mann mit der Stahlkralle” and “Die Braut des Teufels”). Thankfully the music is much better than the German translation of these breathtaking motion pictures. Just eight songs in 22 minutes may give you a hint of what to expect. D-beat meets Thrash Metal meets hate-bursting vocals. If you could imagine a mix between “Lycanthro Punk” by WOLFPACK, “Fast Forward” by DEFLESHED and “Panzer Division Marduk” by MARDUK you have a proper idea of what SATANIC DYSTOPIA sound like on their debut release. A pretty unique mixture, the only band I know that did something comparable were GENOCIDE SS on their third (and sadly last) release, simply entitled “Genocide Superstars III”. If anyone still owns a cassette player, this astonishing album (recorded in Rottingham, errh, Nottingham) is also available as a tape. Packaged in a clear oversized cassette album with double sided cover, limited to 150 copies. More info at: www.facebook.com/satanicdystopia, www.satanicdystopia.bandcamp.com, http://novisiblescars.bandcamp.com