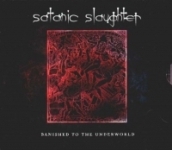 Swedish SATANIC SLAUGHTER used to be a band, that did not convince me with their albums (e.g. “Land Of Unholy Souls”, “Afterlife Kingdom”), but always did receive rave reviews of their live-shows and so I always thought that there must be something about this band. And tataa!!! Finally the day the Black / Deathers came up with a good CD has come!!! “Banished To The Underworld” is a great album for all who are into aggressive Swedish Black / Death that reminds of the godly UNANIMATED, the deeply missed DISSECTION or INFERNAL. Although I know, that many people are extremely bored by this musical direction, I can only speak in favor of SATANIC SLAUGHTER – they skillfully mix some more thrashy songs (‘Dark Temptation’, ‘One Night In Hell’, the latter was even written in 1985) between their traditional Black / Death assaults and manage to create much more variation and sinister feeling than many of the other bands that play this style. The hymnic ‘Towards Damnation’s End’, the driving ‘Infernal’ or ‘Apocalyptic War’ show best how this kind of music can still be entertaining and fascinating after the end of the fucking Black / Death trend in the mid 90s. SATANIC SLAUGHTER do not start to suck by being too melodic or come up with shitty and uninspired song material. “Banished To The Underworld” is a fast, straight-in-your-face album, that summons the intense feeling the acts I mentioned above used to create some years ago. Other positive things are Andreas Deblen’s possessed vocal performance and the powerful production at Studio Helltower. Well, there’s not a single weak song on “Banished To The Underworld” and I can only recommend this release to all fans of excellent Swedish Black / Death. The band’s Email: satanicslaughter@hotmail.com The band’s website: hem.passagen.se/ztefdark