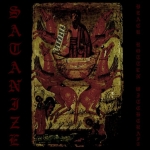 Sometime the phrase "love it or hate it" is the only thought that comes to my mind when listening to music like "Black Rotten Witchcraft". SATANIZE from Portugal are active since 2001, they released a bunch of demos, one EP and several split releases on tape and vinyl. Even a live album saw the light of day (respectively the fires of hell) in 2011. "Black Rotten Witchcraft" is the third full-length. Playing this style of music for more than 14 years I guess the musicians must be quite dedicated to their work and show high endurance. Imagine Black Metal in its most primitive and elementary form. ILDJARN, early GORGORTH and BEHERIT, definitely not suitable for everyone. In fact it is almost impossible to make out any differences during the 32:37 minutes playing time. Ok, the opener is some kind of slow or mid-paced instrumental, but that’s all. Surprisingly the sound is not that low-fi like the early / mid nineties stuff of ILDJARN and BEHERIT. Generally I think everyone knows what to expect. However, I did not want to deprive you the pseudonyms of the involved musicians. The band members are: Reverend of Diabolical Services and Sinister Sorcery, Reverend of the Hell Legions and Macabre Tyranny, Reverend of Blasphemous Incantations and Dark Summonings. Like I wrote above – love it or hate it! http://satanize.do.sapo.pt, www.dunkelheit-produktionen.de